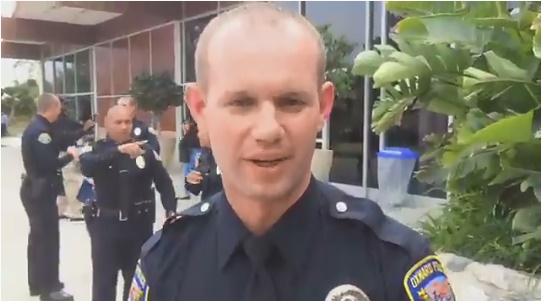 A Navy veteran made law enforcement history in Ventura County on Thursday by becoming the first amputee not only to graduate from the sheriff's training academy but also to don the uniform of an Oxnard (CA) Police Department officer.

"This is a happy day for all of us," Aaron Heldreth, 31, said as he stood outside the Oxnard Performing Arts Center on Thursday afternoon in full uniform, surrounded by family members, including his wife and two daughters.

Heldreth, along with 45 other law enforcement graduates, had just taken the stage inside, graduating from a grueling six-month course at the Ventura County Sheriff's Office's Criminal Justice Training Center in Camarillo.

Heldreth's left leg was amputated below the knee after an October 2008 car accident in San Diego. He'd just turned 22 and had been in the Navy for about five years at the time.

Afterward, he underwent numerous operations, including three amputations on his lower left leg. But within less than a year, he rejoined his Navy dive team after being outfitted with a high-tech prosthetic. He continued to serve in the Navy for about eight years, said his wife, Crystal Brewer.

"I think he's going to do an awesome job," Eric Sonstegard, Oxnard's assistant chief of police, told the Ventura County Star as he stood next to Heldreth on Thursday.