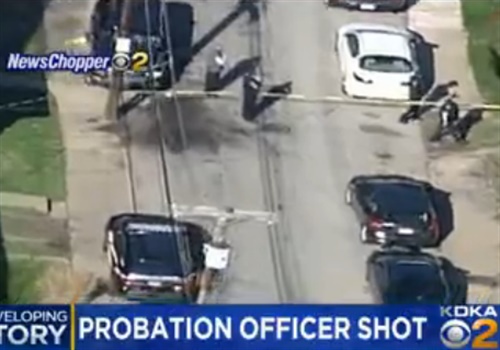 Police are looking for two suspects after a probation officer and another man were shot outside of a home in Wilkinsburg, PA, late Wednesday afternoon, reports KDKA.

According to emergency dispatchers, the ambush-style shooting was first reported just before 5 p.m. at a home in the 1500 block of Marlboro Avenue. The victims were on the front porch of the home when the shots rang out. Police say 11 or 12 shots were fired from a handgun.

Police say a bullet penetrated the skull of the probation officer. His client was shot five times and was in surgery Thursday morning.

“One of the victims shot was a [Allegheny] County probation officer. He was responsive, walking and talking at the time of transport,” said Allegheny County Police Supt. Coleman McDonough.

Police won’t release the name of the probation officer at this time. They say his client is on probation for previous gun violations.

Both are expected to survive their injuries.