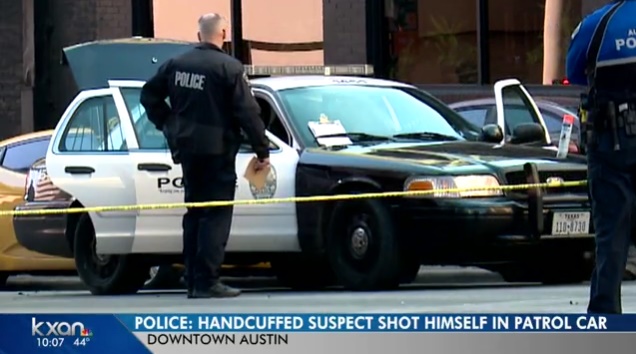 Austin, TX, Police are investigating how a suspect handcuffed inside a patrol car was able to get into the car with a gun and shoot himself, reports KXAN.

Police arrested the young man at Barton Creek Square Mall around noon for shoplifting and possession of a controlled substance. Officers couldn't figure out his name, so they decided to drive him to APD Headquarters downtown to get fingerprints. On the way, police say the young man was making suicidal comments. When the officer asked if he had the means to do that, the suspect said he did.

"Removed a pistol it appears from the back of his waistband, placed it towards his head while still handcuffed, was able to pull his hands around to the side," explains APD Interim Chief Brian Manley. Manley says the officer then pulled over and got out of the car in front of the Austin Ale House, and started shouting commands at the suspect. "The officers were trying to get people a safe distance away from the scene while actively handling what was happening."

According to Manley, after six minutes of pointing the gun at himself, the suspect shot himself in the head. Police believe the man is in his late teens or early 20s, but he still has not been identified. The suspect was sent to University Medical Center Brackenridge in critical condition.