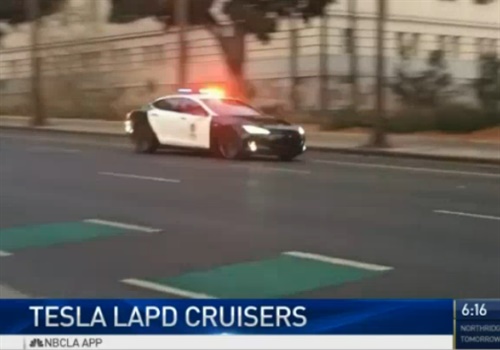 The Los Angeles Police Department will test a Tesla Model S sedan as a patrol car because it offers higher performance and longer range than other battery-electric vehicles on the market, the department's fleet manager told NBC Los Angeles.

The move follows the department's purchase of 100 BMW i3 battery-electric hatchbacks in June as part of Mayor Eric Garcetti's sustainability plan for the city fleet. The city leased the vehicles from a local BMW dealer.

The addition of the i3 cars has been going well, said Vartan Yegiyan, assistant commander of the Administrative Services Bureau.

Earlier this year, Tesla loaned the LAPD two Model S sedans for testing, but the vehicles were never equipped with police gear.

Once retrofitted with the police equipment needed for patrol duty, the Tesla will be put to the test in the field by an on-duty patrol sergeant, who will be driving to emergencies and possibly even taking part in pursuits, according to Yegiyan.