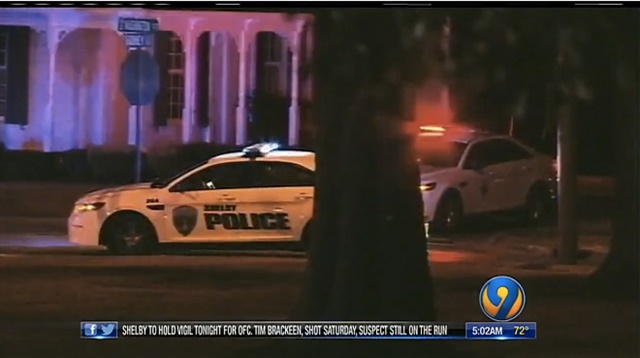 A Shelby, NC, police officer who was shot and seriously wounded Saturday morning as officers tried to serve an arrest warrant died Monday in a Charlotte hospital.

Officer Tim Brackeen, 38, was shot around 12:20 a.m. while looking for Irving Fenner Jr. Other responding officers heard the gunshots and found Brackeen near Parkview Street.

Brackeen was shot in the torso. He was listed in stable but critical condition, was first brought to Cleveland Regional Medical Center and then flown to Carolinas Medical Center in Charlotte, where he died.

Fenner still at large. He was wanted on armed robbery and kidnapping charges. Murder charges are now expected.

The state of North Carolina has offered a $10,000 reward for information leading to the arrest of Fenner.

Illinois Man Charged with Bringing Explosives to Riot in Minnesota

An Illinois man has been charged by the U.S. Attorney's Office after police say he traveled to Minnesota to participate in a demonstration that quickly devolved into a riot, and that he had handed out explosive devices to people gathered and told them to throw the weapons at police.

As rioters continue to cause havoc in parts of New York, it was discovered on Monday that at least one of the participants in the mayhem painted the words "Kill Cops" on a road sign in Brooklyn.

Los Angeles Police Chief Michael Moore on Monday defended the actions of officers who used a police vehicle to push aside rioters who were reportedly threatening them on Sunday in downtown Los Angeles.

Two officers with the Atlanta Police Department have reportedly been fired for alleged excessive use of force over the weekend while responding to protests and rioting in the city over the weekend.

An officer with the Wilson Borough (PA) Police Department was struck in the head by a combative subject who was attempting to assault another man during a domestic incident.

An officer with the Federal Protective Service was shot and killed Friday night in Oakland amid protests over the death of George Floyd.

Two people—one a so-called human rights activist and another an attorney with a Manhattan law firm—were arrested over the weekend for throwing a Molotov Cocktail at a New York Police Department patrol vehicle, leaving it charred from the flames.