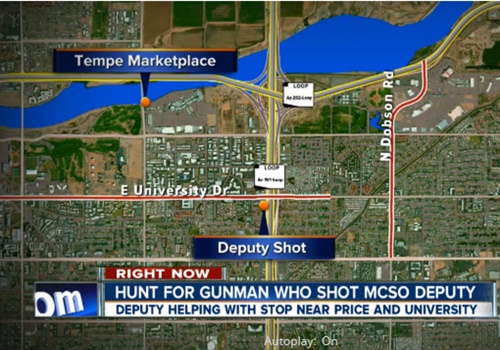 A deputy with the Maricopa County (AZ) Sheriff's Office was shot on Saturday morning while finishing up a traffic stop in Tempe, reports KNXV.

According to the Tempe Police Department, a deputy with the MCSO DUI task force was completing a traffic stop with a man in a car at Price Road and University around 2 a.m. when another vehicle, not connected to the stop, drove up behind the deputy and opened fire.

"He was struck in the lower part of his body," Tempe Police Department Lieutenant Noah Johnson said. "He's stable and appears to be okay."

The deputy, who is a 10 year veteran, was taken to the Scottsdale Osborn Medical Center where he was underwent surgery.

Tempe police also said several shots were fired at the deputy, and MCSO confirms the deputy was struck multiple times.