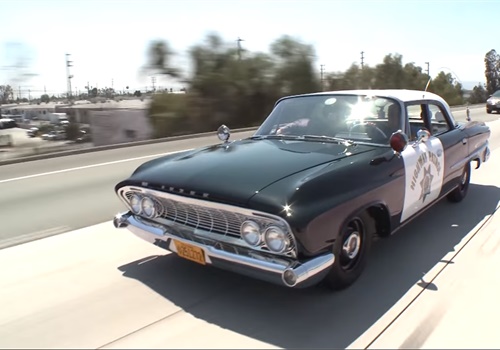 The latest vehicle to swing by Jay Leno's Garage is a 1961 Dodge Polara. This one was used by the California Highway Patrol half a century ago, ordered specially by the state police instead of the Darts that were usually used by law enforcement, according to Autoblog.

After sitting out in the sun for a few decades, it recently underwent a comprehensive, ground-up restoration by the historians and craftsmen at the Automobile Club of Southern California.

As you can see, the result of the restoration is quite stunning. The ACSC apparently spared no expense, bringing the 413-cubic-inch V8 back up to working order, along with the emergency lighting, radio, certified speedometer... the works. In the process they even found the engine cranked out more than the factory quote of 325 horsepower, recording 332 hp and 406 pound-feet of torque on the dyno.

The Polara CHP cruiser hadn't even been back out on the freeway since the restoration was finished. But after getting the full run-down from the guys responsible for its resuscitation, Jay wasted little time in bringing it back to its natural habitat.