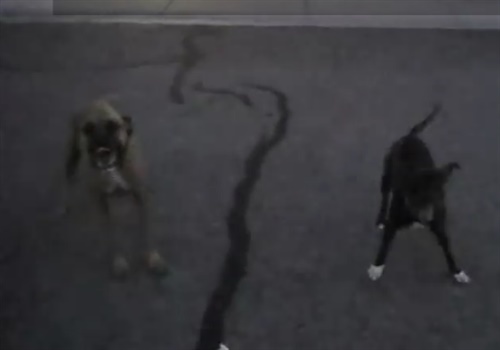 A police officer is being praised for keeping his gun holstered after two vicious dogs roaming an Idaho neighborhood charged him, reports WXIN.

Body camera footage shows Meridian police officer David Gomez standing his ground as the canines, one foaming at the mouth, run directly at him.

Gomez can be heard warning bystanders as he readies his nonlethal tools — a baton and pepper spray. Not only does he prevent an attack, but he manages to usher the snarling animals into a patrol car without incident.

Video of Officer Gomez is getting positive attention online after Edith Williams, of an organization called Nonlethal Canine Encounters, shared it on Facebook.

The Meridian, ID, police force sent two officers to a Defensive Tactics Canine Encounters course in 2014, Williams said, which taught the use of confidence and "less lethal means" in situations involving the public and loose dogs. The tactics Gomez used were the same taught in the course, according to Williams.

The owner was later cited for having vicious dogs at large.