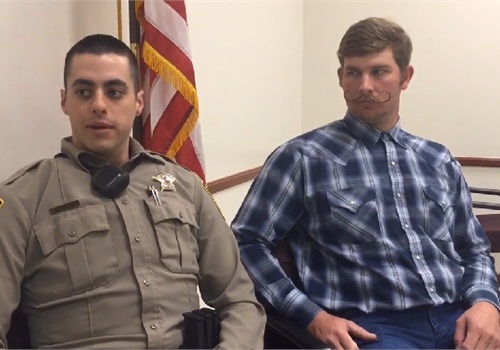 Not thinking about his own life, a local Marine Corps veteran jumped into action and stopped a man from reaching a Bastrop County, TX, deputy's gun as the suspect pummeled the officer during a struggle last month, reports the Austin American-Statesman.

"Freeze!" Scott Perkins yelled as he pulled out his concealed handgun, pointing it at the suspect.

"I'm alive today because of him," Deputy Dylan Dorris, 23, said, reflecting on the events surrounding a disturbance call outside a Bastrop County gas station Jan. 16. "There are no words to explain it. He's such an outstanding citizen. He's here for our country, our community, and you really feel the love."

Perkins' actions caused the suspect to leave Dorris and flee, before he was detained and taken into custody by another deputy and Dorris shortly thereafter.

Kenton Desean Fryer, 32, of Arkansas, was arrested on charges of aggravated assault of a public servant, taking an officer’s weapon, evading arrest or detention with a vehicle, and driving while under the influence with a child under 15.

The department plans to honor Perkins with a sheriff’s commendation for his efforts to help Dorris.