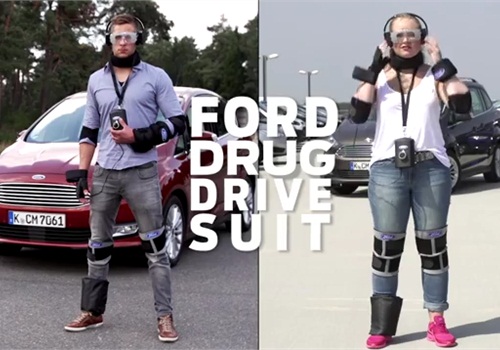 Like most everyone else who's ever driven a vehicle, the folks at Ford know that sliding behind the wheel while under the influence of anything is a terrible idea, and the company is looking to drive that point home as part of its Ford Driving Skills for Life young-driver safety initiative. Henceforth, the program will include the use of a special suit designed to simulate the effects of a variety of drugs, to show teens in a practical way that driving a vehicle in such a state is no joke, reports Car and Driver.

Acting on a driver's entire body, Ford's getup has been dubbed the "Drugged Driving Suit," although it isn't so much a suit as a collection of bizarre attachments for the users' wrists, ankles, knees, and head. Besides making the user look as if they're wearing a last-minute Robocop halloween costume, the components can slow joint mobility, vibrate wrists to simulate hand tremors, and mimic degraded balance with weights unevenly distributed across extremities. The goggles distort the user's vision while also flashing trippy-looking lights at their periphery; as if the visual stimulation weren't enough, headphones also blast random noises modeled after hallucinative, imaginary noises.