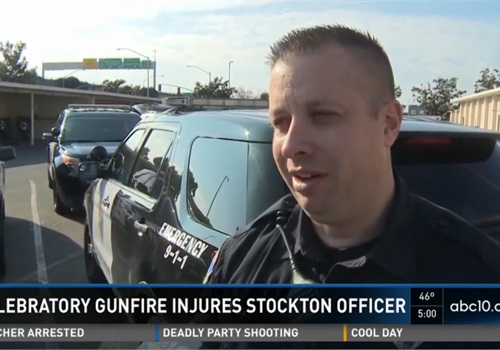 A Stockton, CA, police officer suffered a minor injury at midnight when celebratory New Year's Eve gunfire hit his vehicle and then him.

Travis Weber had just finished his shift and was unloading that vehicle at the department in downtown Stockton.

"I heard a loud pop and then felt a sting to my right leg. The loud pop was it (bullet) hitting the vehicle and then ricocheting toward me," Weber said.

Stockton police warn the public every year on the dangers of shooting guns into the air. Homes in both north and south Stockton were also hit just after midnight. So was a second Stockton police vehicle. No other people were injured.

"It's why they tell people not to fire in the air, the prime reason. It was me t his time, but it could have been a child or a family outside celebrating," Weber told ABC 10.