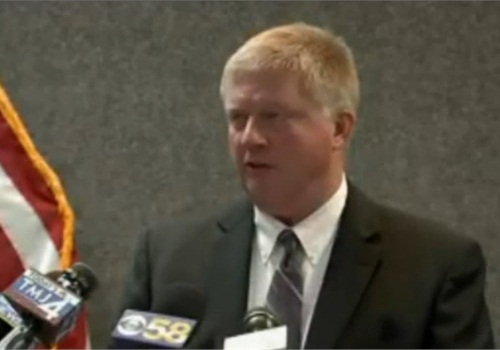 A woman is dead, and the man she lived with is in the hospital. This, after an officer-involved shooting in Wauwatosa, WI, on Monday night, reports WITI.

It happened at the Normandy Village Apartments near 124th and North Avenue.

Officers were dealing with two crime scenes on Monday night -- one where the man was shot by officers, and one where the woman's body was found.

Wauwatosa Police Chief Barry Weber said officers were called out to the Normandy Village Apartments for a possible domestic incident around 8:00 p.m. A tenant reported hearing a woman screaming and then seeing someone jump off a balcony.

When they arrived, a chase ensued between officers and someone who was fleeing the scene.

Chief Weber said officers caught up to the fleeing suspect near N. 124 Street. At that time, a physical struggle ensued between the 34-year-old male suspect and a 50-year-old police supervisor -- and the suspect produced a knife.

"The suspect cut or slashed and stabbed at the supervisor repeatedly. Two of the other officers that were on the scene fired their service weapons to stop the threat. Each officer fired one round, we believe from their handgun, striking the suspect with a total of two rounds," Chief Weber said.

Officers on scene found a 32-year-old woman dead below the balcony of an apartment. It is unclear how she died. An autopsy was scheduled Tuesday.