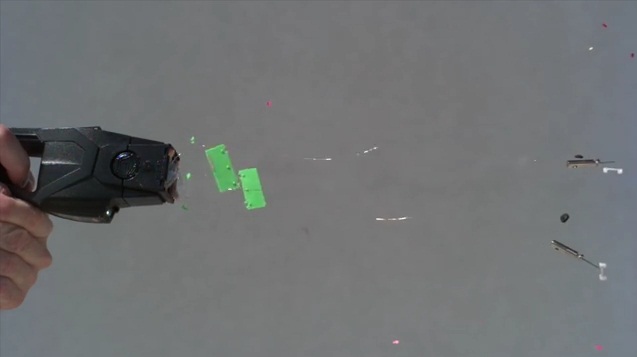 VIDEO: TASER Videos Slowed Down to 28,500 Frames Per Second

The Slow Mo Guys came to TASER HQ this summer to record the TASER X26P Smart Weapon in amazing slow motion. It went public last week and now has more than 8 million views. TASER was involved with slow motion recordings at 20,000 frames per second (FPS) for Discovery's Time Warp six years ago, but this new video of a TASER X26P deployment and voluntary exposure was recorded at an unbelievable 28,500 FPS.

Watch the very first electrical arc set off the TASER XP cartridge which then sets of a cascade of events: The small compressed nitrogen container is punctured releasing 2,500 pounds per square inch (PSI) of inert gas. This compressed air expels out of the two bores which blows off the two green blast doors (watch them wobble and bend if you look closely), followed by a spray of Anti-Felon Identification (AFID) confetti, and then two XP probes disperse (one straight out and the other at a downward 8-degree angle). As the probes propel downrange, they are followed by the thin insulated TASER wire which unspools in an undulating manner as it's shown coming out of the chamber ever so slowly. You'll see what occurs in a split-second slowed down to incredibly slow speeds.

Then of course there's Dan Hafen, who takes the "exposure." Watching him hit in the back with the TASER XP probes in slow motion is fascinating as there's just an incredible reaction by the skin when the probe sticks into the back. Lastly, there's the removal of a probe in slow motion which shows just how much the skin stretches.

This is a great educational tool and fascinating to see in such slow motion. You can watch The Slow Mo Guys' TASER X26P video here: http://www.policemag.com/videos/channel/weapons/2015/09/taser-videos-slowed-down-to-28-500-frames-per-second.aspx

You can also view the 2009 TASER X26 slow motion video of the former flagship TASER X26 deployment upon a volunteer (interestingly it's Todd Faulkner -- now the chief of police at Hinsdale PD in N.H.). You'll also see how the X26's electrical current affects various gases and the TASER XREP deployed from a TASER X12 less-lethal shotgun -- both no longer sold. You can watch here: https://www.youtube.com/watch?v=6hhR8Xmw760

TASER wants to thank Gavin Free of the Slow Mo Guys and his team; Dan Hafen of VisionResearch for taking one for the team; Team TASER and especially Doug Landers, Albie Lavin, and Doug Sand; and many others whose help enabled 8 million viewers in one week to see something that most will never see during a TASER deployment, exposure, and probe removal.

TASER will be adding this video to its next training modules.