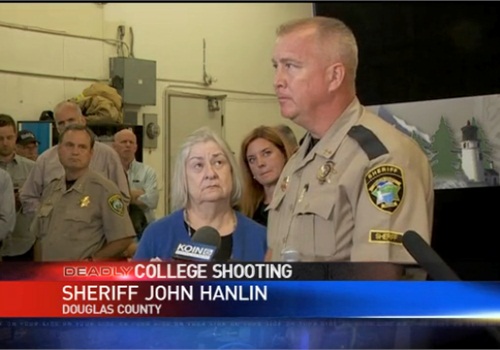 A gunman opened fire inside a classroom at a rural Oregon community college Thursday, killing at least nine people and wounding 7 before dying in a shootout with police, authorities said. One survivor said he demanded his victims state their religion before he started shooting.

Douglas County Sheriff John Hanlin said Thursday evening that the toll had been revised downward from the earlier figures of 13 dead and at least 20 wounded.

Hanlin said at least two responding officers acted heroically in a shootout with the gunman, but it was not clear if the gunman was killed by authorities or whether he took his own life.

At a news conference, a visibly angry Hanlin said he would not name the gunman, KVAL TV reports.

"I will not name the shooter. I will not give him the credit he probably sought prior to this horrific and cowardly act," he said.

The name of the 26-year-old shooter has been released through other sources.