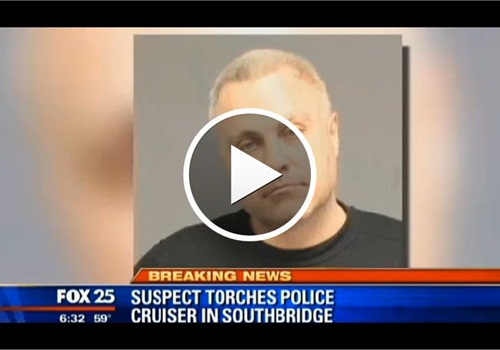 VIDEO: Man Dumped Gas on Cruiser, Lit It on Fire

Southbridge, Mass., Police say a man walked up to an unoccupied cruiser at the police station, dumped gasoline on it, and lit then it on fire late Tuesday night, reports FOX25 in Boston.

Officers say Arthur Burnham of Southbridge stood by and cheered while the cruiser burned. In cell phone video obtained by FOX25, a man can be heard laughing and yelling "It's on fire!" before he's arrested. He can also be heard yelling, "They're civil rights violators!" at the officers.

Burnham was charged with arson of a motor vehicle and malicious destruction of property. A not guilty plea was entered at his arraignment Wednesday. He was held without bail and ordered to undergo a mental health evaluation before returning to court next month.