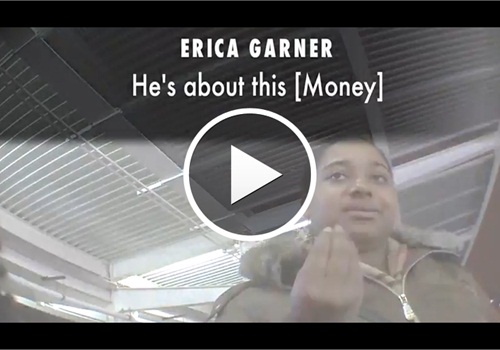 VIDEO: Sharpton All About the Money, Eric Garner's Daughter Says

Al Sharpton is all about the Benjamins, a daughter of Eric Garner, who died after a confrontation with NYPD officer last year, claims in a bombshell videotape.

Erica Snipes tees off on the reverend as interested primarily in money during a conversation secretly recorded by controversial conservative activist James O’Keefe’s group, Project Veritas.

One of O’Keefe’s investigators with a hidden camera posed as a Garner supporter during a protest last month at the St. George Ferry Terminal on Staten Island.

“You think Al Sharpton is kind of like a crook in a sense?” the investigator is heard asking Garner’s oldest daughter.

“He’s about this,” Snipes replies, rubbing her fingers together.

Snipes, 24, also complained that the Staten Island director of Sharpton’s National Action Network, Cynthia Davis, scolded her for handing out street fliers about her father’s case that did not include NAN’s logo.

In an interview with The New York Post on Monday night, Snipes denied that she had accused Sharpton of being a money-grubber.

But she stood by her criticism of Davis, the NAN director, who she claimed tried to block her from attending a protest at the Staten Island Museum against mass incarceration.

Sharpton on Monday night accused Project Veritas of “exploiting” Snipes and a dispute within the Garner family.