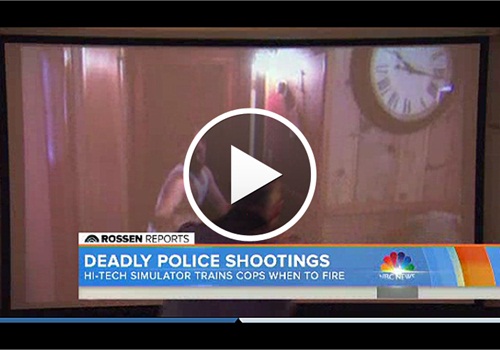 VIDEO: Florida Agency Releases Video of Controversial Use of Force After Pursuit That Critically Injured Officer

Across the country, police officers make split-second decisions in potentially deadly situations. And in the wake of the shooting death of Michael Brown on Aug. 9 in Ferguson, Missouri, the issue of race complicates their challenge.

Data from a recent study shows that white and African-American officers alike hold a stronger subconscious bias against African-American suspects — and that they are now overcompensating for that bias, becoming more hesitant to shoot minority suspects. Researchers believe that's because those officers fear backlash.

Such research is underway at Washington State University Spokane, where officers are trained to handle potentially deadly encounters in a state-of-the-art simulator.

Washington State University researcher Steve James, one of the country's leading experts on police shootings, helps run the program. "What we're trying to understand here is what makes these situations difficult for officers, what's going through their mind, how their bodies are reacting," he told Rossen.

Rossen tried the simulator himself, in a scenario about a suspicious person who might be wanted in connection with an assault. Rossen was instructed to use deadly force only if his or someone else's life was threatened.

In the blink of an eye, a simulated suspect appeared and pulled out his hand, and Rossen reacted by opening fire. "Was that a beer bottle?" Rossen said afterward. "Oh God, he had a beer bottle. It looked like a gun, it was so dark."