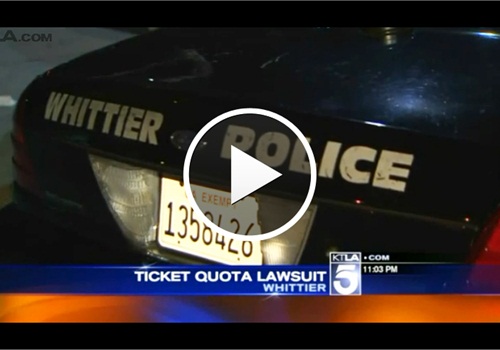 Six Whittier, Calif., police officers are suing the city, saying they faced retaliation when they complained and refused to meet alleged ticket and arrest quotas.

Officers Jim Azpilicueta, Anthony Gonzalez, Mike Rosario, Nancy Ogle, Steve Johnson and Cpl. Joseph Rivera say they spoke out against the quotas, which they claim were imposed by the Whittier Police Department in 2008, according to a suit filed Tuesday in Los Angeles County Superior Court.

The officers said their “careers have been materially and adversely affected, and irreparably harmed” by the city, the Los Angeles Times reports.

City Manager Jim Collier and Whittier police spokesman Officer John Scoggins declined to comment and said they had not seen the lawsuit.

The officers say the alleged ticket and arrest quotas continue to this day.

The alleged retaliation started after the officers said they complained to their supervisors and the police department’s Internal Affairs Division, the suit claims.