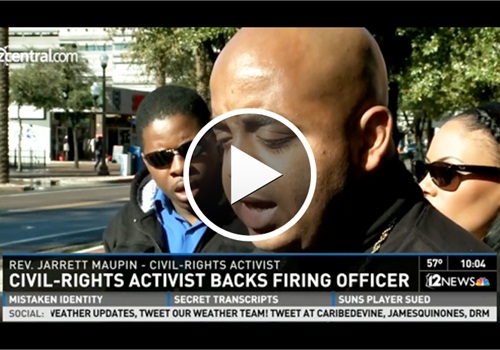 A Phoenix-area civil-rights activist, who last week participated in force-on-force training with the Maricopa County Sheriff's Office, has thrown his support behind Arizona State University for moving to fire the campus police officer accused by a university professor of wrongful arrest and excessive force last summer.

"Firing this officer is not an easy decision, but it's certainly the right thing to do in this scenario," the Rev. Jarrett Maupin told AZCentral.com.

Maupin and a half-dozen civil-rights activists held a news conference on Tuesday at the Tempe campus to voice their support for the university and ASU Police Chief Michael Thompson.

Maupin is calling for the Maricopa County Attorney's Office to review whether the officer committed a crime. He also is asking Arizona Attorney General Mark Brnovich to look into whether Ersula Ore's civil rights were violated. The campus Police Department should review its training policies in the wake of the incident, he said.

Ore, an assistant professor of English at ASU, was arrested May 20 when she refused to show identification and kicked the officer in the shin after he stopped her for jaywalking near College Avenue and Fifth Street in Tempe, according to a police report.

She was arrested on charges of aggravated assault on a police officer, criminal damage, refusal to provide a truthful name and obstructing a public thoroughfare.

She later pleaded guilty to one count of resisting arrest and was sentenced to nine months of probation; the other charges were dropped.

Maupin said if the firing doesn't happen, "we will march on this campus" and the office of ASU President Michael Crow until the officer is fired.

The officer's attorney, Mel McDonald, has maintained his client did nothing wrong. The officer has been on paid leave since July and is appealing the termination. A Facebook page set up to support the officer said that he hopes to learn the outcome of his appeal by Monday, Jan. 19

After shooting an unarmed suspect in the MCSO's force-on-force training scenarios last week, Maupin said people should comply with police.