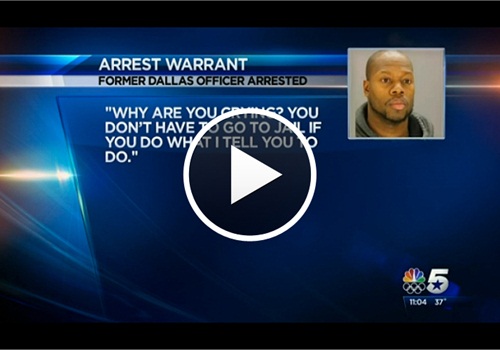 A Dallas police officer who once played football for Southern Methodist University has been arrested, accused of sexually assaulting a woman in a police car while in uniform and on duty, NBC DFW reports.

According to the Dallas Police Department, 28-year-old Police Officer La'Cori Johnson was on duty when he stopped a woman and another person on the 9300 block of Larga Drive on Sept. 9, 2013.

According to an arrest warrant affidavit, Johnson performed a background check on both people and told the woman she had a warrant out for her arrest and told her friend to leave the location. As she was instructed to get into the back of the police car, the woman, whose name is not being released, started to cry.

According to the arrest affidavit, Johnson asked the woman why she was crying and said, "You don't have to go to jail if you do what I tell you to do."

On Tuesday, Johnson was questioned by Internal Affairs detectives. He later resigned from the department and was immediately arrested and booked into the Dallas County Jail. As of this writing, Johnson was being held on $25,000 bond.