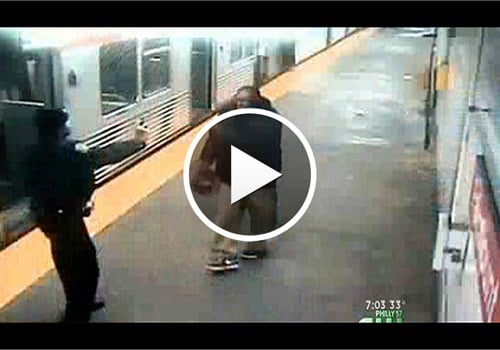 Once on board, the man allegedly tried to steal a woman's baby, Nestel said.

Jones waited at the next stop, Fairmount Avenue. When the train arrived, the man emerged - and charged the transit cop. Jones used his baton and pepper spray to no effect, the Philadelphia Daily News reports.

"It was without a doubt a life-or-death battle," Nestel said. "The guy has a good 100 pounds on the cop. He takes the cop down three times."

Jones eventually called out for help. Two passengers ran to his aid and helped the cop pin his attacker.

Backup officers soon arrived and helped Jones lock up the brawler, whose name was not immediately released.

The Waukegan Police Department said an officer was "investigating an occupied vehicle" Tuesday when the suspects fled the scene. Later, a second officer spotted and approached the vehicle, which they said began moving in reverse toward him.

The Belly of the Whale

You are on a heroic journey, and you will face and overcome great challenges before the end of your career.

Illinois Officer Injured After Being Dragged by Vehicle

An officer with the Tinley Park (IL) Police Department was injured when attempting to apprehend a burglary suspect on Saturday, the agency confirmed to media outlets on Thursday afternoon.

Texas Officer Turning in Her Badge Over Anti-Police Sentiment

Kat Ratcliff knew she wanted to be a police officer from a very early age, but following the protests and anti-police sentiment in the wake of the killing of George Floyd, she determined that the best course of action for her and her family was to put that lifelong desire to be in the ranks of law enforcement to the side.

Two officers with the UPMC Police Department in Pittsburgh are being lauded as heroes for saving the life of a woman who was bleeding by applying a tourniquet and keeping her calm until other first responders were able to get to the scene.

Officers with the Ogden (UT) Police Department are mourning the loss of a beloved K-9 after the dog struggled mightily against a debilitating disease.

A judge in Minnesota has dismissed a third-degree murder charge filed against an officer with the Minneapolis Police Department who is accused of causing the in-custody death of George Floyd in May.