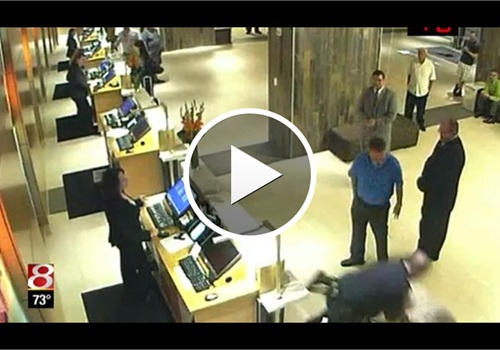 An Indianapolis Metro Police officer is facing an internal investigation after he tackled a business traveler in the lobby of the JW Marriott hotel.

Hudkins, who owns a home theater installation company in Maryland, was in town attending the CEDIA trade show. Hudkins and his employee were returning to their room when they heard voices inside. Fearing a theft, Hudkins went to hotel management and urged them to call police.

Officer Wilson responded to the hotel and told an animated Hudkins to settle down. Hotel surveillance cameras then captured Officer Wilson pushing Hudkins into the reception desk and taking him to the floor.

Hudkins was handcuffed and taken outside toward the squad car where video shows Officer Wilson dropping him onto the pavement.

Chief Rick Hite told WISH the incident is under investigation, including a disparity in the officer's report where he reported Hudkins "sticking his finger in my face."