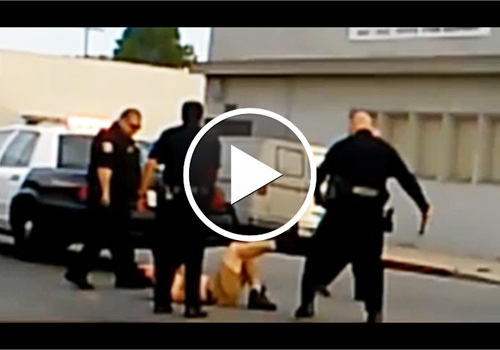 Several Long Beach (Calif.) Police officers now face an internal investigation for using batons and a TASER on a man on his back near a city intersection.

Citizens captured video of the Monday arrest that unfolded at about 6 p.m. at South Street and Locust Avenue. Police responded after receiving multiple calls about a fight outside of a liquor store, reports the Los Angeles Times.

After arriving, officers encountered Porfirio Santos-Lopez, 46, who was later seen on surveillance video hitting another man in the head. A 4 1/2-minute clip posted to YouTube shows officers striking Santos-Lopez multiple times with batons after TASERing him. KTLA has posted the footage that shows Santos-Lopez assaulting the man.

Santos-Lopez, who later told officers he had taken methamphetamine, acted irrationally and punched the asphalt when approached by officers. He asked officers to kill him and later yelled, "Shoot me!"

Chief Jim McDonnell called the citizen footage "certainly disturbing" and promised a full investigation. Family members of Santos-Lopez have said he has a history of mental illness.