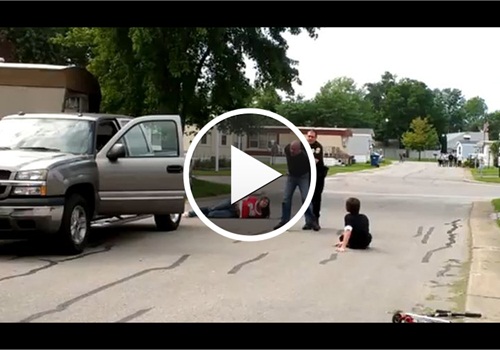 A Washington Township (Ohio) Police officer has been placed on administrative leave after he handcuffed and detained a family during a heated vehicle stop.

Officer Eric Hart, who works part time, stopped a female drive for a vehicle with an altered license registration sticker on Sunday afternoon at 166 Pine Ridge St. During the stop, a man later identified as Aaron Tatkowski, stopped and got out of a second vehicle.

Tatkowski advanced toward the officer and said, "I'm f**king sick of you cops," several times. Officer Hart ordered Tatkowski to get back and pointed his stun gun as the man when he refused.

During the incident, a group of bystanders filmed the action on a cell phone video that was later posted to YouTube. The incident is now under investigation by the agency, reports the Toledo Blade.