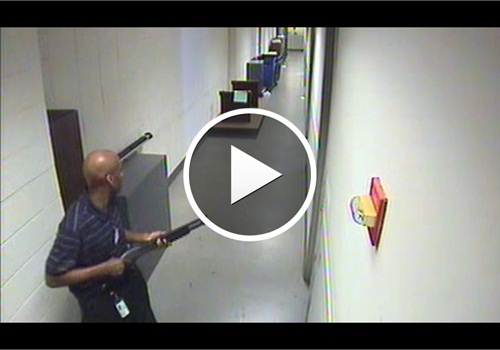 The FBI has released preliminary findings of the Sept. 16 Washington Navy Yard shooting that includes new details about the shooter's weapons, a timeline of his movements, and his mental state leading up to the shooting.

The release includes video surveillance footage showing Aaron Alexis, 34, entering the complex and stalking the hallways with a sawed-off Remington 870 shotgun and Beretta handgun he used as a lone-wolf gunman to kill 12 people and wound four others.

Alexis modified the shotgun he purchased at a northern Virginia gun shop two days before the shooting by sawing off the barrel and stock. He also added etchings indicating his mental illness, according to the FBI.

Alexis, who was employed as a contractor for a private information technology firm, apparently believed he was "being controlled or influenced by extremely low frequency (ELF) electromagnetic waves," according to the FBI.

"The etching of 'My ELF weapon!' on the left side of the receiver of the Remington 870 shotgun is believed to reference these electromagnetic waves," the FBI said. "In addition, a document retrieved from his electronic media stated, 'Ultra low frequency attack is what I've been subject to for the last three months, and to be perfectly honest that is what has driven me to this.'

On Sept. 14, Alexis purchased the shotgun and ammunition. The same day, he purchased a hacksaw and other items at a home improvement store in northern Virginia.

Alexis arrived at the Navy Yard on the morning of Sept. 16 and used a valid pass to gain entry to Building 197. At one point during the rampage he obtained a Beretta handgun. He was shot and killed by responding Metro (D.C.) Police officers.

When he first arrived, Alexis drove a rented blue Toyota Prius into a parking garage across from Building 197 at 7:53 a.m. He entered Building 197 at 8:08 a.m. carrying a backpack and headed to the elevator. At 8:09 a.m., Alexis exited the elevator on the fourth floor and entered the men's bathroom carrying the backpack and a clipboard. At 8:15 a.m., Alexis crossed the hallway into the 4 West area of Building 197 carrying only the shotgun. He shot the first victim at 8:16 a.m. At 8:17 a.m., police received the first 9-1-1 call. At 8:20 a.m., Alexis left the fourth floor using stairs and entered the third floor. At 8:28 a.m., he appeared on the first floor. At 8:57 a.m., he returned to the third floor. At 9:25 a.m., police officers end the rampage by shooting and killing Alexis on the third floor.

Alexis was prepared to die in the attack and there are no indicators he was targeting specific people.

ELF technology was a legitimate program for naval sub-tonal submarine communications; however, conspiracy theories exist that misinterpret its application as the weaponization of remote neural frequencies for government monitoring and manipulation of unsuspecting citizens, according to the FBI.