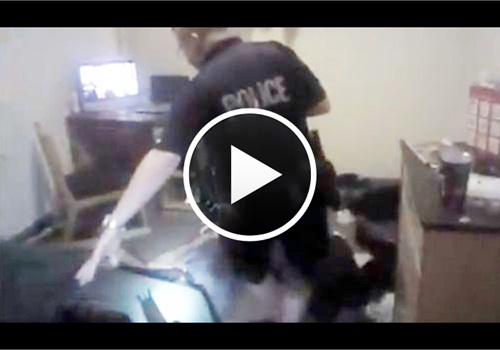 The University of Central Florida released footage of its officers locating the body of a suspect who planned to attack other students, but instead killed himself.

The footage shows officers entering the Tower 1 dorm room of James Seevakumaran on Monday, after the 30-year-old student activated the fire alarm.

One officer without a ballistic vest can be seen crouching and entering the room, followed by another officer with an AR rifle. The officers check each of the rooms and eventually locate Seevakumaran's body in a bedroom. A rifle can be seen laying at the foot of the bed.

A search of the room revealed a .45-caliber handgun, .22-caliber tactical rifle, a couple hundred rounds of ammunition and four homemade explosives in a backpack.

University officials also found several packages for Seevakumaran in the mail room that contained magazines, a sling, and a shooting training DVD. He left a detailed checklist of plans to carry out an attack, according to a university press release.

The Seevakumaran family released a statement stating that "James was a loner and did not have a history of violence. The family does not wish to make any further comments to the media, and they are requesting privacy during this difficult time."