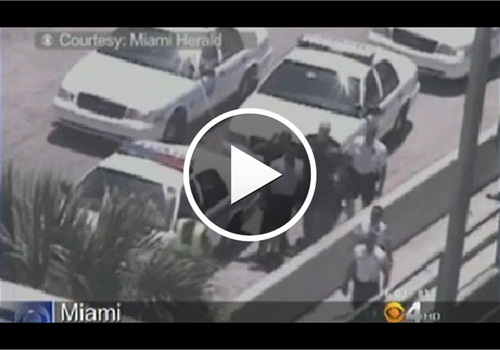 The Miami Police Department officer who fatally shot a naked man who was chewing off another naked man's face on Saturday has handled the traumatic episode well so far, according to the agency's patrol union.

The officer, who has not been named, is a younger officer on the force, according to Sgt. William Scarola.

"I hear the officer is doing all right," Sgt. Scarola tells POLICE Magazine. "It's very horrific responding to this. I'm sure it's going to have some type of impact on him."

The men and women who enter law enforcement typically understand they will be exposed to traumatic events. However, witnessing cannibalism is far from the norm, even in police work, Susan Saxe-Clifford, a former LAPD psychologist, told POLICE Magazine.

"This particular situation is above and beyond what every peace officer has to deal with," Saxe-Clifford said. "This is very strange and very traumatic."

Any Miami PD officer involved in a shooting death is given three days off and offered the services of a psychologist. The officer must visit the psychologist before returning to duty and typically speaks with investigators only after other witnesses are contacted. This approach provides the officer a cooling-off period.

"Generally the younger officers are more vulnerable because they haven't been harmed and don't have the adaptive responses," Reiss told POLICE Magazine. "And they're not as willing to admit they're affected. They want to play Superman."

This officer was patrolling the MacArthur Causeway on Saturday, when a man on a bicycle flagged him down to report a disturbance. The officer approached an area near the Miami Herald building, and noticed a naked man chewing on the face of another naked man.

The attacker has been identified as 31-year-old Rudy Eugene. The victim, 65-year-old Ronald Poppo, is clinging to life at Jackson Memorial Hospital.

When he first encountered Eugene, the officer ordered him to stop. Eugene instead lifted his head, growled at the officer, and went back to chewing Poppo's face. The officer fired four shots that struck Eugene, who died at the scene.

An internal investigation will determine whether the officer's use of deadly force was justified. Miami Police officers can use deadly force if a victim's life is threatened, Sgt. Scarola said.

"There was immediate physical harm to the victim and [possible] death," Sgt. Scarola said. "The first round hit the offender, and it didn't faze him."

In these cases, suspects are known to tear off their clothing as their body temperatures rise, develop super-human strength, and growl at others. In late March, 13 officers were needed to subdue a suspect at the Ultra Fest Miami music festival.