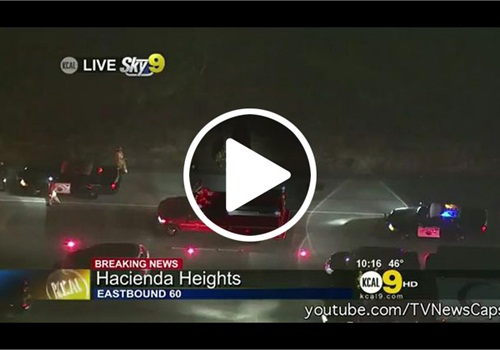 The California Highway Patrol's high-speed pursuit of a motorcycle ended when the cycle rider rear-ended a car in the Hacienda Heights area of Southern California.

The Jan. 18 crash, which was broadcast live on KCAL-9, occurred on the eastbound 60 Freeway. In live footage, highway patrol officers are seen pursuing a motorcycle that speeds away from them. Footage shows the rider weaving through traffic and accelerating to evade officers.

The rider and his female passenger then come up too quickly on a car, striking the vehicle and flipping the bike in traffic. The two are thrown from the cycle and slide down the road. Their injuries were non-life threatening.