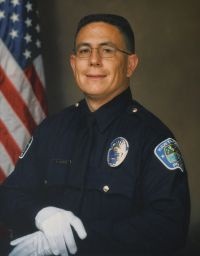 A Hawthorne (Calif.) Police motorcycle officer was killed during a crash Thursday in Torrance while the two escorted a funeral procession for a third officer who had died of cancer.

Officer Garton was thrown into oncoming traffic and collided with a vehicle traveling north on Hawthorne. Both officers were transported to Harbor General Hospital. Sgt. Fowler is in stable condition with a broken leg.

The officers were handling traffic control for the funeral procession of Manhattan Beach PD's Officer Mark Vazquez, who died May 15 of cancer.

Officer Garton was a member of the Hawthorne PD for more than seven years and a motor officer for more than four years. He leaves behind a wife and two sons. He is the first line-of-duty death for the department.