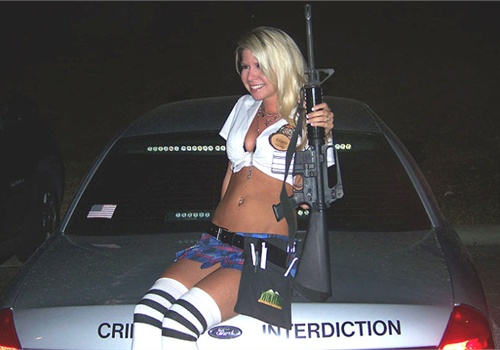 When I was assigned to the training unit, I had a talk I gave every recruit class. I'll make it a tad more presentable for polite company. I don't want to offend, but this reality ends careers if not handled correctly.

For the guys, sooner or later a badge bunny will approach you. Have you never heard of these creatures? Well, there are some females who are attracted to cops. Face it, you may not have movie star looks, but it's the uniform and your authoritative position in life that attracts them. It doesn't matter whether you're married, engaged or committed, you can still be in their sights.

If you think this will never happen to you, think again. These groupies, badge bunnies, or holster sniffers seem innocent enough. They claim they're looking for a friend — a strong, handsome young man in uniform. Add to that description a good steady job, good pay, and benefits. Wait, I thought they were only looking for friendship. They want to hang around, show up in your life and sooner or later potentially ruin your career and life.

This doesn't occur innocently. They're usually known to others. So, if you think you're going to keep this a secret because you're such a stud muffin, think again. Most of the older cops know them and their warning signs. If you have a senior officer telling you to disengage, this isn't because he wants to chat her up. He knows the warning signs. Funny enough, some are known within police circles, and the cops have to protect their young recruits. Some have been through more precincts than the cleaning crews.

Female officers should know there are men out there attracted to self-confident women in uniform as well. Add to that the excitement factor of police work and that you have money. These men don't have the fable-like quality as their female counterparts, but they exist. One can counter that women are still gaining in law enforcement ranks so it's a lesser problem. As the more women enter the ranks, the more lurking males will appear. If the other officers tell you to stay away from this guy, listen to your colleague's advice.

You're a young officer, perhaps single and working the night shift. You work at night, go to court during the day, sleep when you can and have not had a night off since you can't recall. A friendly person finds you interesting. Pretty soon, it's not a citizen contact but an exchange of names and numbers. A call on your cell later for coffee and you're in their sights. What could be a mere passing encounter could be a career ender. OK, maybe there are some readers who think this may sound innocent enough for them, but you're not observing the clouds in the horizon. Consult an old crusty FTO for additional training in career choices.

After my many years, ask me how many marital disagreements these encounters have caused. Trust me, you've worked far too hard to get the job. You've endured the academy, FTO program and are set on a career. You may already have a great significant other, spouse or steady. Do you want to risk personal and professional Armageddon on a midnight fling? Take a look at your life and see what you have and what you can lose.

William "Bill" Harvey is currently serving as chief of police in south central Pennsylvania. He retired from the Savannah (Ga.) Police Department where he worked assignments in training, patrol, and CID. Harvey has more than 25 years of experience working with recruits, rookies, and FTOs.

William "Bill" Harvey is currently serving as chief of police in south central Pennsylvania. He retired from the Savannah (Ga.) Police Department where he worked assignments in training, patrol, and CID. Harvey has more than 25 years of experience working with recruits, rookies, and FTOs.