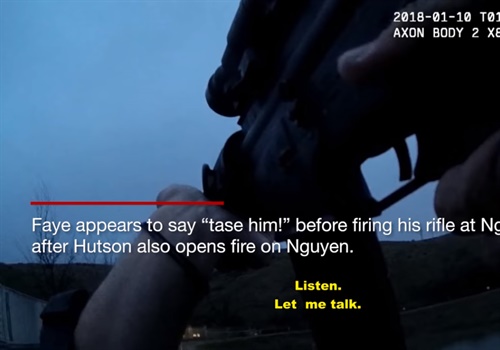 Prosecutors have determined that two officers with the San Jose (CA) Police Department were justified in fatally shooting an ax-wielding man in January 2018, according to the Mercury News. The man—identified as 27-year-old Thompson Nguyen—had been seen waving the weapon at a power facility in a rural area near downtown.

"Any reasonable officer would conclude that Nguyen, whether as a result of a mental health issue or not, had decided that he was going to die that day and that if he had to attack an officer with a weapon to make it happen, he was going to do so," Deputy District Attorney David Boyd wrote in the report.

In the video, Nguyen could be heard saying "Shoot me!" and "Kill me!" Nunes responds, "We don't want to shoot," and "Just listen" as the officers tell him to drop what he's holding. Nguyen also said "I didn't do anything," to which Nunes reportedly responded, "We're not saying you did."