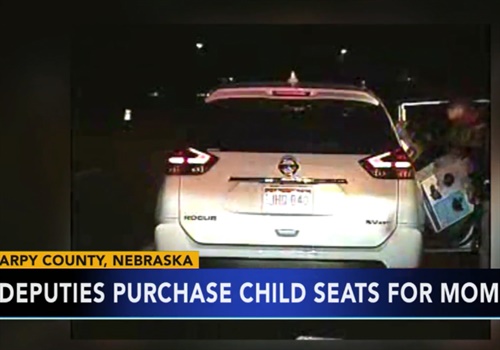 Deputy Jason Jones had pulled over the vehicle for speeding when he noticed that the two children in the back seat were not in proper safety seats.

The deputies installed the seats, issued the driver a warning for speeding, and a citation for not having those safety seats.

"I just didn't see any other viable option," Deputy Manning said in an interview with ABC News. "It's something I would gladly do to keep some kids safe."

Wal-Mart, where the seats were purchased, has said it will reimburse the deputy for the cost of the seats.

Police said someone in the crowd then used an unknown accelerant on the wooden framing around a door of the building, then lit it on fire.

Officer who Shot Jacob Blake Back on Duty, Will Not Face Discipline

The officer, Rusten Sheskey, returned from administrative leave in late March. He was "found to have been acting within policy and will not be subjected to discipline," according to a statement Tuesday from Kenosha Police Chief Daniel Miskinis.

Kim Potter, who resigned from the Brooklyn Center Police Department Tuesday, was arrested about 11:30 a.m. Wednesday by Minnesota Bureau of Criminal Apprehension agents at the BCA in St. Paul.