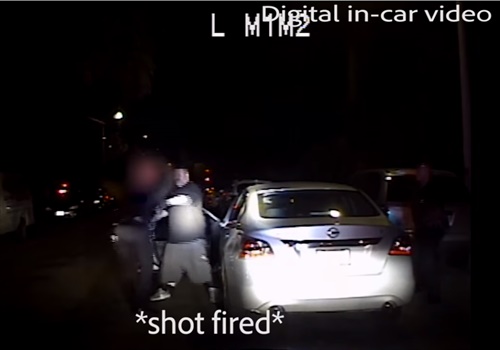 The Los Angeles Police Department has released video on YouTube from a July shooting at a traffic stop that left an officer with a gunshot wound to her leg.

On July 27, two officers stopped a vehicle driven by a man identified as 32-year-old Richard "Biz" Mendoza—who had prior convictions for possession of a firearm by a felon and narcotics sales.

As the officer—a nine-year veteran of the department—approached the suspect vehicle, Mendoza got out of the car and shot her point blank in the chest. That bullet was stopped by her body armor, but another shot struck her in the leg.

Her partner then returned fire, striking Mendoza with shots that would ultimately be fatal.

The officer is reportedly recovering and "in good spirits."

The agency released the 10-minute video under a new policy that requires such recordings to be made public within 45 days of an officer-involved shooting.