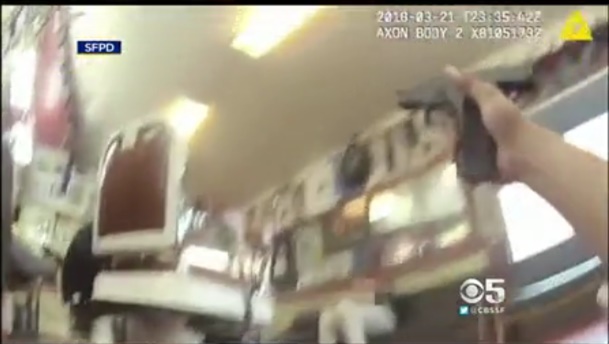 San Francisco police have released body camera footage of a shootout that killed a suspect and injured five other people, including an officer, inside of a barber shop, CBS San Francisco reports. The video was shown during a tense town hall meeting where there was conflict even between members of the family of the 21-year-old man killed.

Police did not disclose who shot the four other people who were injured. It remains unclear from the chaotic and graphic body camera video. One of the victims suffered life-threatening injuries, however, police say all of victims have been released from the hospital.

According to Capt. Valerie Matthews, the shooting happened on March 21. Family members had reported that Jehad Eid was threatening them, flashed a gun and was trying to break into their garage. When police arrived, the family said he had gone to the barber shop.

Eid stood up and shot at the officers upon their arrival. Two officers returned fire, shooting 26 bullets at Eid, who then shot nine rounds from a .40-caliber handgun. He was struck 18 times.