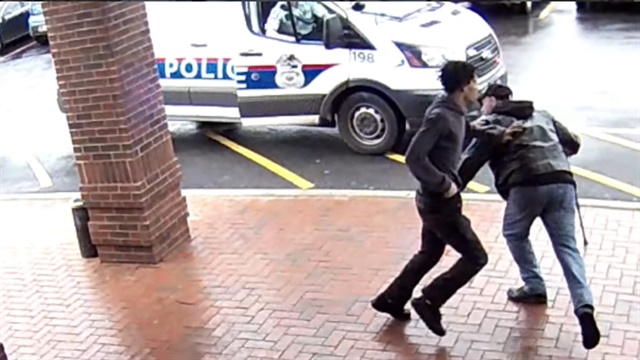 On April 3, Columbus, OH, police officers were pursuing two armed men on foot when they received some unexpected help from a civilian.

Video released last week shows the civilian who was only identified as Bill tripping one of the suspects.

"Bill was at a west Columbus library with his granddaughter. He was waiting outside to leave when he heard police sirens. He tells us he looked around and saw a man with his hand in his waistband running toward him.

"Bill assessed the situation as fast as he could, cane in hand. He heard officers yelling multiple times to drop the gun. Bill says with officers lagging a bit behind the suspect he did what he could to help them nab the armed man. Bill stuck out a back leg to trip the suspect who was running from police. That move likely saved the 18-year-old suspect's life. It also allowed police to catch up to him to make the arrest," the Columbus police report on Facebook.

Police says they recovered a 9mm pistol with an extended magazine containing 29 rounds. The suspect, who has a lengthy criminal record, went back to jail. No one was injured.

"Community involvement, be it by courage, bravery and/or fancy footwork, helped take a criminal off the streets of Columbus. Thank you Bill for sticking your leg out for us," the department wrote on Facebook.