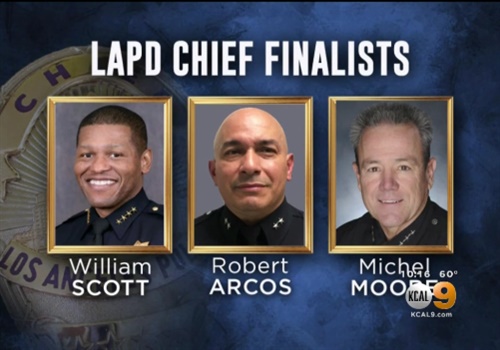 The race to replace Chief Charlie Beck as head of the Los Angeles Police Department has come down to three finalists.

The Los Angeles police commission has pared down its list of nominees. According to the Los Angeles Times, they are Robert Arcos, Michel Moore, and Bill Scott. It now becomes Mayor Eric Garcetti’s decision, reports CBSLA/KCAL9.

Arcos, a deputy chief at the LAPD Central Bureau, has worked in the department since 1988. He has worked in patrol, gangs, vice and narcotics, along with other management roles.

Moore, first assistant chief in the office of operations, is a 37-year-veteran of the department and has also worked in patrol, gangs, and narcotics, in addition to counter-terrorism.

Scott is the San Francisco PD’s current chief, attaining that role after 27 years with the LAPD. He was deputy chief of LAPD’s South Bureau before heading north.