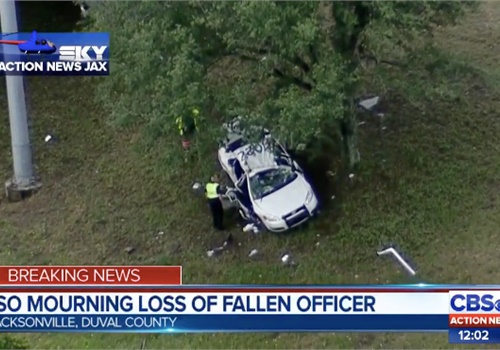 A Jacksonville police officer was killed in a single-car crash early Tuesday morning, according to the Jacksonville Sheriff's Office.

Sheriff Mike Williams said the officer, identified as Lance C. Whitaker, was responding to a traffic crash on rain-slicked I-295 at 4:30 a.m., when the officer hit a tree.

The officer was transported to a local hospital, where he later died.

Williams believes weather may have played a factor in the crash, ActionNewsJax reports.

Jacksonville is a combined city-county agency where police officers work for the sheriff’s office.

An off-duty officer with the Guthrie (TN) Police Department stopped a domestic dispute from turning deadly as it devolved into a shooting in the parking lot of a local bar over the weekend.

An officer with the Dallas Police Department who was injured in a roll-over crash on Wednesday night is said to be recovering from his injuries and is expected to be okay.

An officer with the Socorro (TX) Police Department rushed into a mobile home fully engulfed in flames and thick smoke to rescue an eight-year-old boy trapped inside.

“Apparently, the pension section is only taking a certain amount of people per day and I think they are backed up ’til late July, early August,” one cop said.