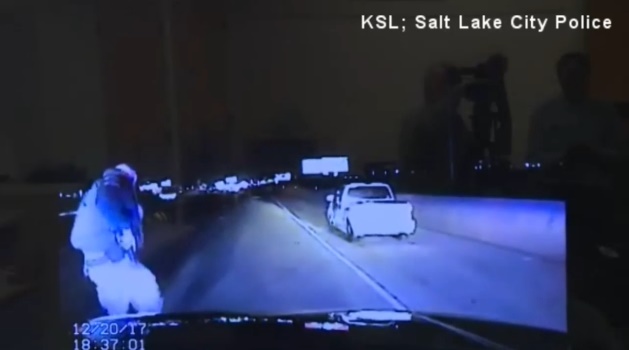 New video shows the suspect in an attempted murder involved in a shootout before leading police on a high-speed chase, reports KTRK-TV.

Arturo Gallemore-Jimenez, 37, is behind bars after a violent barrage of gunfire caught on camera in Utah Dec. 20.

Officers said they were looking for Jimenez initially after he was seen shooting out the window of his own truck after locking his keys inside, KSL reports.

When police spotted him on I-15, the suspect allegedly fired three shots at officers. Five officers responded by returning fire.

"This individual was going to use deadly force to get away from anything," Utah County Sheriff Jim Tracy said.

But Jimenez took off, leading officers on a chase. Nine miles later, an officer was able to stop the suspect by driving his patrol vehicle in front of the vehicle. The officer then shot at the vehicle, and Jimenez crashed before surrendering.

When officers pulled Jimenez from the vehicle, they discovered he was wearing body armor.

Officers then found out Jimenez was suspected of shooting someone in Colorado and leaving them for dead.