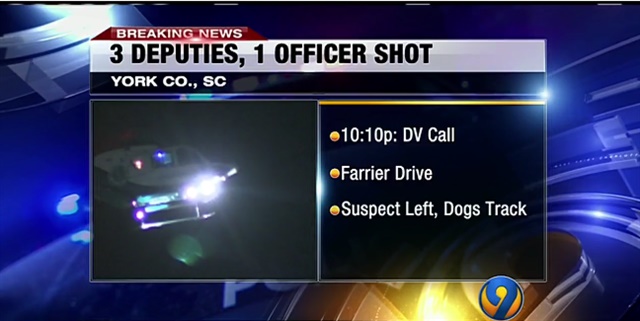 Four York County, SC, law enforcement officers were shot early Tuesday morning while searching for a domestic violence suspect in a wooded area. The suspect was also shot and is in custody.

When officers responded to the domestic violence call, the suspect escaped to the woods. He has been identified as Christian Thomas McCall, 47.

A York County Sheriff's Office K-9 handler was tracking the suspect with a dog when shot around 1 a.m. Two more deputies and a York Police officer were shot at about 3:30 a.m.

The conditions of the wounded law enforcement officers have not been released. York County SO public information officer Trent Farris asked the public to keep the officer and deputies in their prayers at a press conference.

The suspect's condition was also not released.

A South Carolina Law Enforcement Division source told WSOC that the suspect fired on a law enforcement helicopter with a rifle. At least one of the shots reportedly hit the aircraft. No injuries to the crew were reported.