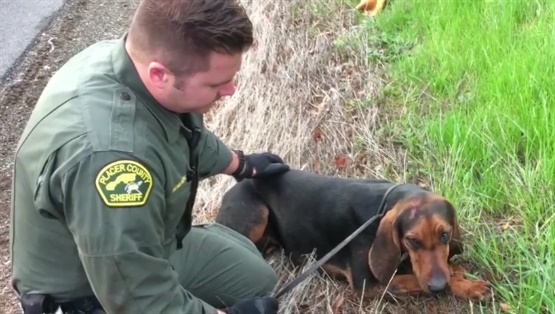 At 8:15, the sheriff’s K-9 handler, Deputy Semenuk, was driving on westbound Highway 80, east of Penryn, when he saw a bloodhound run across the eastbound lanes of traffic, jump over the center divider, and continue to run across westbound lanes of traffic. Commuter traffic came to a screeching halt as motorists tried to avoid hitting the scared dog.

Semenuk immediately pulled over and began to slow down traffic while attempting to call the young bloodhound over to him. The dog seemed scared and confused and ran back into the westbound lanes, where unfortunately it was hit by a passing car. It was pinned underneath the car, its paw under the rear tire.

Thinking quickly, the two law enforcement officers decided to lift the car off the dog using a floor jack from the CHP officer’s truck. Semenuk repositioned his patrol car for safety reasons, then calmed the distressed dog and continued to lift the car.

Using his leash to create a makeshift collar, Semenuk was able to remove the dog from underneath the tire. He kept the young bloodhound calm and comfortable on the side of the freeway until Placer County Animal Services transported him to Loomis Basin Veterinarian Clinic for emergency medical treatment. The dog’s owner showed up as the dog was being loaded into the truck.

The veterinary clinic said the dog named "Ruger" was in stable condition as of Wednesday night, and is expected to fully recover. He has no broken bones, just lacerations and road rash, Placer County SO reports on Facebook.