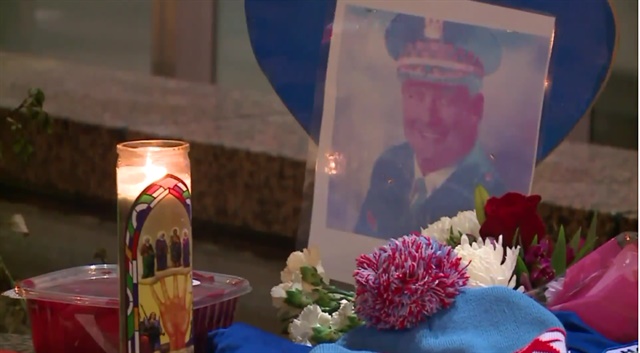 Memorials are going up around Chicago to honor the police commander who was shot and killed Tuesday near the Thompson Center in the Loop.

Flags fly at half staff and Cmdr. Paul Bauer's 18th District is draped in black and purple. A memorial filled with flowers and balloons pays tribute to the commander, who gave his life for the safety of Chicago.

The support doesn't stop there. There have been candlelight vigils in Bauer's Bridgeport neighborhood. Even outside the Thompson Center, flowers and candles are lined up on the street. If you look up, you see signs of support for the Chicago Police Department from the windows.

Chicagoans lined up to sign sympathy books at the 18th District police station and in the lobby of City Hall, sharing their thoughts with the family Cmdr. Bauer left behind. Many had never met Bauer, yet felt it was their duty to pay their respects to an officer who made the ultimate sacrifice for their city, WGN TV reports.