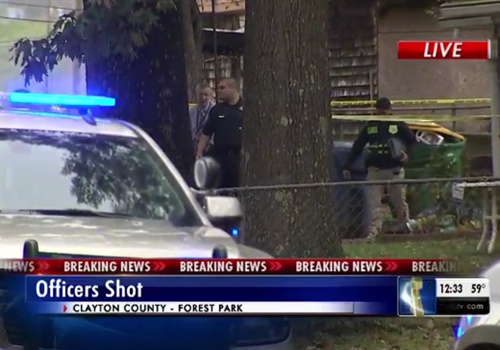 What began with a reckless driving call Wednesday turned into a shooting that left one Forest Park, GA, police officer in critical condition, another with non-life-threatening injuries, and a suspect dead, reports the Atlanta Journal-Constitution.

About 10:45 a.m., the officers responded to the 4700 block of Mitchell Street after learning a motorcyclist was driving recklessly and not wearing a helmet, Forest Park police Maj. Chris Matson said.

The officers followed him behind a house on Mitchell Street. An exchange of gunfire took place, and both officers were shot, Matson said.

Authorities do not know how many shots were fired, Sgt. Kelli Flanagan said.

Responding officers got the injured officers out of the way and set up a perimeter. After a search, Bailey was found dead behind the house.

"It is not known for sure how Bailey died," Matson said.

The officers' names have not been released. Both have been with the department for about two years, Matson said.