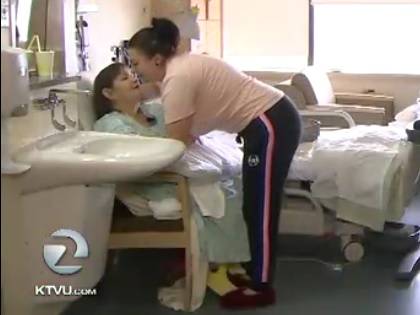 As a soldier in the U.S. Army, Anna Cuthbertson served in the war zones of Iraq and Afghanistan. As a San Francisco police officer, she patrols the streets of the Richmond District, busting criminals and protecting citizens.

The average person might think that’s heroic enough. But in a selfless act initially meant to save one life, Cuthbertson, a mother of a 13-year-old girl, donated a kidney this week to a stranger, and in the process set off a chain reaction that made it possible for eight other people to receive lifesaving kidney transplants, the San Francisco Chronicle reports.

“I thought, the more the merrier. I was thrilled,” said the 35-year-old Cuthbertson, who was recovering at UCSF on Thursday after undergoing the surgery on Tuesday.

The operation was the culmination of a mission that started about a year ago after she listened to an episode of the podcast “Strangers” featuring a story about a transplant that mentioned the website www.matchingdonors.com. Intrigued, she clicked onto the site.

"There are these saints that walk among us who decide I've got two good kidneys, I get to help someone, I can save someone I mean, it it's - I'm humbled, I'm in awe," Gary Grealis,  husband of kidney recipient Joan Grealis, told KTVU. "Anna's not just saving my wife, she's saving me, too."