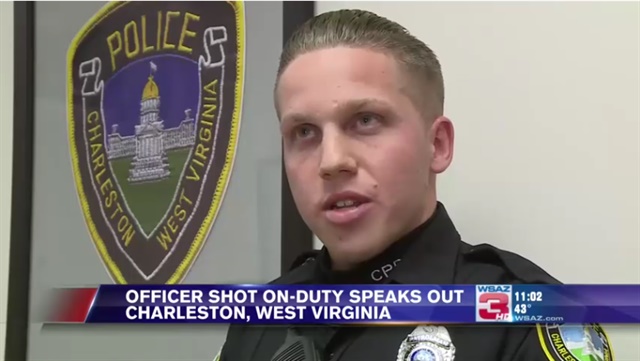 What began as just another night on the job became the most harrowing night of Charleston Police Office Seth Johnson's life, when the patrolman took a bullet to the chest in the line of duty.

His body armor saved his life. He returned fire, killing his attacker.

"I thank the Lord above," Johnson said. "That round could've gone anywhere else on my body, other than my vest, which could've ended very differently."

It all happened as Johnson responded to a call for a home invasion a week and a half ago, WSAZ reports.

"Everything happens for a reason," Johnson said. "It could've been several officers going through that door, that could've meant several officers shot ... so if it was me taking one round, versus my buddies taking several, I would take that any day."

Fifty-six Portland officers were deputized before a rally in the city last weekend by the far-right Proud Boys group. Portland city officials apparently did not know that their officers' federal deputization status would last until the end of this year.

Deputy Anthony White and Deputy Kenny Ingram were killed when state troopers said their county-issued vehicle struck a tractor-trailer that had stopped for traffic in the left eastbound lane near Exit 190 on Interstate 20 eastbound in Columbia County, the Fulton County Sheriff’s Office confirmed.

A 19-year Sheriff's Office veteran, the officer was a member of the SWAT team, which was helping U.S. Drug Enforcement Administration agents serve a high-risk warrant at the home, Sheriff Mike Williams said.

Officer Joe McCrink completed more than 1,000 miles of bike rides in the month of September in an effort to raise awareness of—and increase funding for—childhood cancer.

Florida Officer Who Saved Infant's Life to be Honored at Ceremony

An officer with the Orlando Police Department who saved the life of a one-year-old girl at the scene of a vehicle collision will be honored by the department and the community at a ceremony on Tuesday.

Minnesota Officer Shot At During Investigation of Alleged Car Burglary

An officer with the St. Paul (MN) Police Department was shot at during an investigation of an alleged car burglary Monday night.

A New York Supreme Court judge has ordered a public inquiry into the case of Eric Garner, who died while in police custody in 2014.