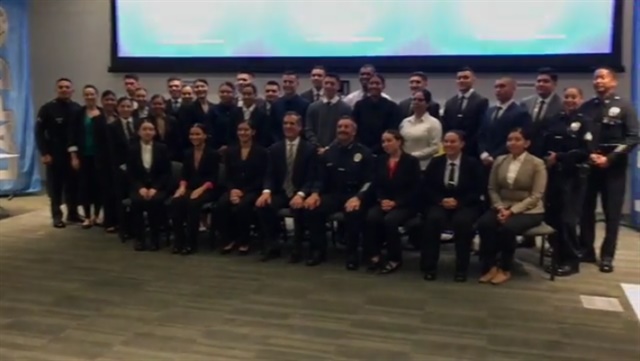 More than two dozen high school graduates will be working part-time for the Los Angeles Police Department and getting paid as part of a new program that aims to recruit and train the next generation of police officers, reports the Los Angeles Daily News.

Through the Pledge to Patrol program – also known as the Associate Community Officer Program or A-COP – participants spend up to 20 hours a week working in civilian roles such as at the front desk – where they will take crime reports and assist the watch commander – performing minor evidence collection, and observing and assisting with patrol functions. They also assist detectives with investigations and enter and retrieve data.

The program, in which participants earn between $15 and $20 an hour depending on education level, allows them to continue their college studies at the same time.

"This is a tough moment for policing nationwide, where a lot of young people don't think about becoming a police officer because of what they see in the news or the divisions that are sometimes showing in other cities," Los Angeles Mayor Eric Garcetti said in an interview.

It's also a chance to further diversify the police force by recruiting participants from every city zip code, he said, while retaining talent that might otherwise drift away from the department.