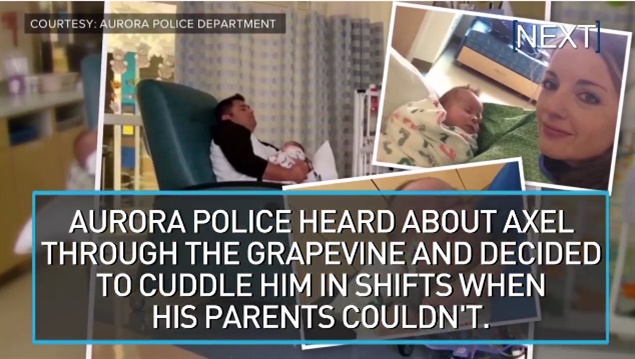 From the moment he was born at 29 weeks, Axel Winch needed a lot of love and miracles to survive.

“They let us know he had all sorts of issues genetically, physically to the point where the news was pretty devastating,” said Adam Winch, Axel’s dad. “He was in for probably a lifetime of issues medically. They’re still not sure what all of it is.” Axel was flown from Grand Junction to Children’s Hospital Colorado in Aurora on August 1, 2017. He was treated at the NICU in the weeks and months since.

Eventually, his mom, a Grand Junction police officer, and dad, a former officer who now owns his own business, had to go back to work.

But Axel wouldn’t be alone.

“I didn't want him to be alone,” said Sgt. Mike Pitrusu, who runs Aurora Police Department’s Employee Support and Wellness unit. “[I] came up with the idea that we would set up basically a watch, that we would have officers sign up for times to come in here and spend time with Axel.”

Aurora Police said nearly 20 officers cuddled with Axel during the days his parents couldn’t be with him. “Somebody called it the cuddle watch,” Pitrusu told 9News.