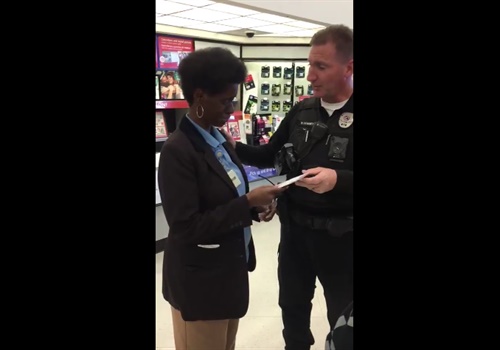 When a woman reported an envelope containing $160 cash had been stolen from her, members of the Glendale (AZ) Police Department donated well above that amount out of their own pockets so she could not only pay her bills but also have a happier Christmas.

The Department shared the story and video on the agency's Facebook page.

"Last week Officer Bill Downey took a report from a 60-year-old female. She works two jobs to support herself," the post reads. "She went to her bank and withdrew some money that included $160 for her electric bill and a phone payment. Afterwards she went to Walgreens and purchased a couple of items and inadvertently left the Desert Schools envelope with $160 on the counter as she talked with a friend. She left the store and then later realized she had left her money, which was then stolen."

Store video surveillance apparently shows a man buying beer and walking away with teh envelope of cash, but he has not been caught.

"The female was upset as she explained this to Officer Downey and was going to have to work extra shifts to recoup the money," the post continues.

Officer Downey and Officer Wes Zygmont discussed the woman's situation and decided to do something to help her, and other employees were happy to join in.

"The officers as well as folks in Communications stepped up and were able to raise $1000 dollars!"

An officer with the Chatham Police Department was injured in a three-vehicle wreck Tuesday night. Two other motorists were injured in the incident, all with serious but non-life-threatening injuries.

Sergeant Keith Wrede reportedly used the pseudonym 'Steven Eric' when he posted "KILL THEM ALL" during a local television station's live coverage of a Black Lives Matter protests on Facebook Live.

State prosecutors have rejected an argument by a former Minneapolis police officer charged in George Floyd’s death that he was "just a rookie overridden by a senior officer at the scene."

Indiana Officers Charged with Assault on 2 Women During Protest

Two officers with the Indianapolis Police Department are facing multiple criminal charges after a confrontation with two women at a protest following the death of George Floyd.