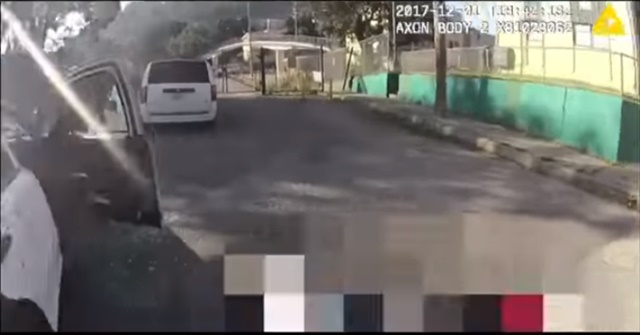 San Francisco Police Chief Bill Scott released body camera video and street surveillance footage Thursday night that shows Keita O’Neil, 42, jumping out of a stolen minivan and running by a patrol car as the officer fires through the glass window and O’Neil falls to the ground.

Scott said the officer who fired the single fatal shot from the passenger seat of a patrol car was riding with a training officer on his fourth day of duty on Dec. 1. Police did not release the officer’s name, the San Jose Mercury-News reports.

O’Neil, who died at a hospital, was suspected of assaulting a California Lottery employee and stealing a van that belongs to the agency. Police chased the van and another SUV seen traveling with it to an area of public housing where O’Neil was shot, officials said.