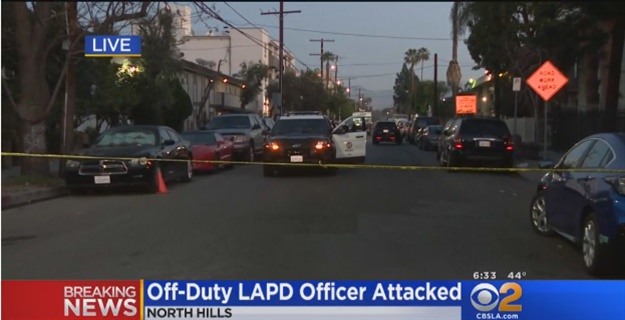 Two off-duty Los Angeles police officers opened fire on a man they say attacked them with a large object — possibly a bat or a flashlight — early Wednesday morning.

A call of an off-duty officer needing help in the North Hills area of the city came in at about 1 a.m., right at the same time there were reports of someone being shot in the area, LAPD Sgt. Andrew Kukla told CBS Los Angeles.

Preliminary reports from the scene were that two off-duty officers were driving in the area and stopped to confront a man outside an apartment building. At some point, the man hit one of the officers in the head with what was initially reported as a bat, prompting both officers to open fire, hitting the man in the stomach.

Both the injured officer and the suspect were taken to the hospital. The officer was treated and released; the suspect is expected to survive.