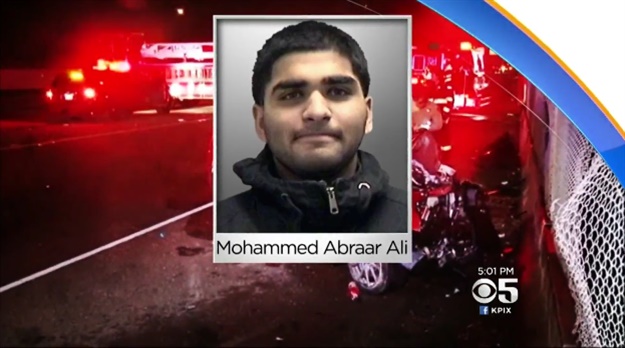 A 22-year-old Hayward man has been charged with second degree murder in the death of a California Highway Patrol officer who was killed in a Christmas Eve traffic collision on Highway 880 in Hayward, the Alameda County District Attorney’s Office announced Tuesday.

Mohammed Abraar Ali was at the wheel of a speeding red Cadillac when it slammed into a CHP SUV with officers Andrew Camilleri and Jonathan Velasquez inside the vehicle. The SUV was parked on the side of the road monitoring highway traffic as part of the CHP’s holiday DUI crackdown.

On the morning of the crash, CHP Assistant Chief Ernest Sanchez said Ali was on his way home from a holiday party. He said evidence shows Ali was under the influence of both alcohol and marijuana at the time of the crash, CBS San Francisco reports.